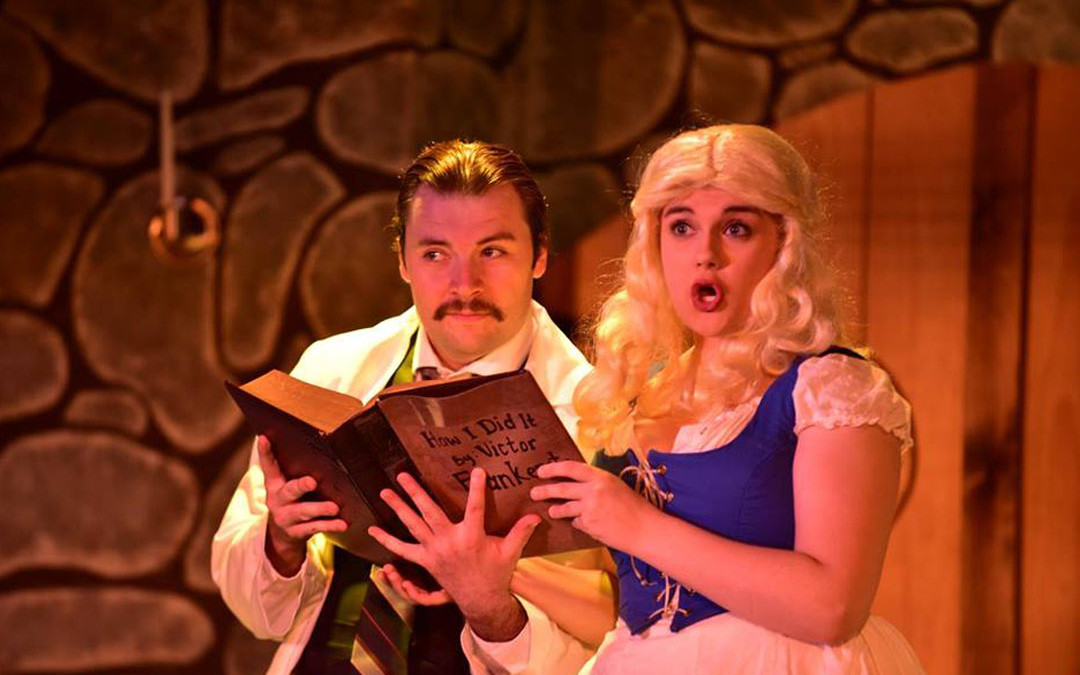 Note: This is the first of what may become a regular feature with NC Theater Stories. Please share your own reviews for the show in the comments below.

Last Thursday, Fayetteville N.C’s Gilbert Theater continued what has become an annual tradition, of opening their new season with a huge, show-stopping, monster of a musical. This year, they may have outdone themselves, with the musical stage adaptation of arguably one of director Mel Brooks’ most beloved comedies: “Young Frankenstein.”

“Young Frankenstein” is, of course, the second Brooks film to receive a stage adaptation, after the unprecedented acclaim of 2001’s “The Producers,” which was an adaptation of the 1968 film of the same name.

Smelling a recipe for success, Brooks released an adaptation of his 1974 horror spoof “Young Frankenstein” in 2007, to much fanfare, but mixed reviews. Critics at the time were seemingly unwilling to let “Young Frankenstein” stand on its own two enormous feet, and like the title character, insisted on comparing it to its predecessor. Audiences, however, were far more receptive and in 2008, the show won Broadway.com’s Audience Award for “Favorite New Broadway Musical.” 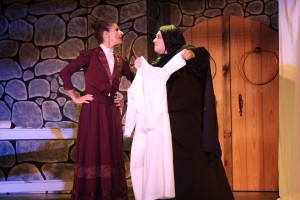 Like the film, the story concerns Frederick Frankenstein, the Dean of Anatomy at New York’s Johns, Miriam and Anthony Hopkins School of Medicine, as played by Gilbert regular, Matt Lamb (last seen as Sir Gallahad in “Spamalot,” at the CFRT), who has never seemed so at home in a part.

Frederick is ashamed of his late grandfather, Victor Frankenstein’s, reputation as a brilliant yet ethically dubious mad scientist, even going so far as to insist on pronouncing his last name as “Franken-STEEN” instead of the traditional way.  However, in order to maintain control of his grandfather’s estate, Frederick is forced to leave his beloved fiancee, Elizabeth (played by Jennifer Czechowski of last year’s “Nunsense,” at the Gilbert Theater), for his grandfather’s infamous castle, in the heart of the recently traumatized town of Transylvania Heights.

Once in Transylvania, Frederick is met by the grandson of his father’s lab assistant, Igor, pronounced, “Eye-gor,” played by Georgia-based actor, Victor Rivera, as well as the newly hired, unexploded German bombshell, Inga (the beautiful and talented Laurel Flom, who is returning to the Gilbert stage, after having previously performed as Luisa, in “The Fantasticks!”).

Frederick seems to require very little in the way of coaxing to be convinced that his father’s life work had some merit, and he decides to give creating his own monster a try. The monster, as played by Ja’Maul Johnson (most recently seen in the CFRT’s “The Three Musketeers”) wastes no time before doing what monsters do best, and rampaging the village. In the monster’s journey, he comes upon a lonely old blind man, Harold the Hermit, played to absolute perfection by actor Nathan Pearce, who also plays Inspector Kemp, a justifiably bitter victim of the previous Frankenstein monster.

“Young’s” director, Pittsburgh, P.A. native Stephen Santa, is himself, quite young, which may be exactly what a show with somewhat dated vaudeville-style humor needed to inject a sense of freshness into it.

“Young Frankenstein” is as ‘bout as straight an adaptation of the film as you’re likely to find, and that predictability can mean death for a comedy, however Santa’s cast bring just enough of themselves, to keep everything feeling as vibrant and lively as a freshly reanimated monster.

Matt Lamb, inparticular, makes Frederick Frankenstein all his own. When Lamb first stepped onto stage, in his lab-coat and chevron mustache, I worried that the mustache wouldn’t be the only thing he’d be borrowing from actor Gene Wilder, who originated the film role. However, Lamb made it clear from line-one, that this Frankenstein would be his own particular blend of mad genius.
Lamb’s performance is one part Bill Murray-style slacker, and one part Matthew Broderick-style neurotic. On top of that, Lamb’s vocals are out of this world, smooth, and precise. Honestly, some of the lyrical gymnastics required of Lamb, border on the cruel. I am an incredible sucker for patter songs, and this musical has no shortage of them, with Lamb doing the heavy lifting.

Laurel Flom is also tasked with some lyrical acrobatics, though you wouldn’t know it from watching her. Flom is one of those actresses that always seems at home on stage, and she truly shines in this role.

Meanwhile, Atlanta G.A.-based newcomer Victor Rivera is doing some more literal gymnastics as Igor. Like Lamb, Rivera had some huge shoes to to fill (or “hump to lug”) in the role of Igor, and he does so using his entire body. Rivera is a tremendously physical actor, and while I felt some of his performance may have come off a bit muggy (truly difficult not to do when performing Brooks’ material), his delivery, commitment and energy, had the audience eating out of his hands in every scene.

For her part, veteran Gilbert mainstay Rhonda Brocki, proved why she’s one of the best in a role she seems born to play, the misunderstood romantic, Frau Blücher (cue horses). Brocki, like Rivera, is an incredibly physical performer, and this is never more apparent than in her showstopping performance of “”He Vas My Boyfriend.” It was nice to see Brocki, whose more recent performances were in “Long Day’s Journey into Night,” and “Rabbit Hole,” get a chance to show off her considerable skills as a comedic performer.

Speaking of “comedic,” I can’t forget to mention the winner of biggest laugh of the show, actress Jennifer Czechowski, as Elizabeth. Czechowski is too, guilty of some mugging, but she steals every scene she’s in, so I’ll have to drop the charges out of respect for her ability.

Czechowski’s first song of the show, a duet with a very sexually frustrated Frankenstein, “”Please Don’t Touch Me,” may have been the single funniest thing I have seen on the Gilbert stage in years. I honestly, knew that this would be a positive review from that point on – and that was in just the first act.

Both actors Nathan Pearce, and J’Maul Johnson, as Kemp / Harold and Frankenstein’s monster, respectively, have less to do, but do a lot with a little. Pearce’s performance as Harold is of particular note, as he is able to elicit laughs from just opening his mouth. Johnson, meanwhile, had the challenge of earning laughter through mostly grunts, roars and facial expressions, which he meets effortlessly. He truly understands the character and is remarkably subtle at times.

The small ensemble (seriously small – like four actors) of James Merkle (Gilbert’s “Macbeth”), Malerie Fritz (Gilbert’s “The Book Club Play”), Reba Fox (making her stage debut), and Garrett Brown (another newcomer) do a terrific job playing an assortment of strange characters. Merkle, inparticular, gets a song to himself as the ghost of “Victor Frankenstein,” which he knocks out of the park.

The light design by Steven Harrington is clever, without being distracting. Harrington is also responsible for the set design, which while remaining one of the most ambitious sets the small black box theatre has attempted in recent memory, was not my favorite.

On a technical level, especially given the small space, the set is brilliant. The spinning walls and bi-parting traveler curtains, run smooth as butter. Aesthetically speaking, however, the large white curtain looks like something that should be hanging in someone’s bathroom, and the walls, painted to look like castle brick, appear flat and cartoonish.

A pet peeve of mine is when a theatre thinks it can get away with phony looking props, costumes and sets, just because they are performing a comedy. When you have actors like Matt Lamb, Victor Rivera and Laurel Flom, literally throwing every bit of themselves into a performance, committing wholeheartedly to a bit, it seems insulting to not meet them halfway when creating the world around them.

The worst example of this can be found in some of the costuming. While for the most part, the costumes, and particularly the makeup, are spot on, some of the costume pieces, for example, the costume worn by Igor, Inga’s blonde wig, and Inspector Kemp’s absolutely pointless muttonchops, appear as if they were purchased from a Halloween clearance bin at a K-Mart. For a comedy to work, every part of it should be as committed to the bit as the actors are.

This is likely the most expensive show that the Gilbert will do all season, and possibly among the most expensive shows the Gilbert has done period, and so I can understand if there was some belt tightening when it came to acquiring costumes, which is often one of the last things a production purchases. It did seem unusual that Flom didn’t simply dye her hair, as Lamb had time to grow a mustache, but having never dyed my own hair, I can’t speak to how much trouble or possible follicle damage that might have entailed.

Finally, Leeanne Valcarcel has returned to the Gilbert Theater, to yet again serve as music director, this time with considerably shorter notice than she had with 2013’s production of “Rent,” as Valcarcel was called in as a last minute replacement for the show’s previously scheduled music director merely two weeks before opening night. Not only did Valcarcel serve as a last minute music director, but she also served as the show’s accompanist, with the only other musician being the wonderfully talented Tyler Pow (Pow is likely best known to area theater goers as an actor, thanks to his work with the Sweet Tea Shakespeare company).

Like the cast, Valcarcel simply kills it. “Young Frankenstein” is not a slow moving musical, and as difficult as I imagine learning the lyrics to those patter songs must have been for Lamb, I can’t imagine having to learn those songs on the piano with only a few weeks notice.

Like the monster itself, this show should have been an impossible undertaking and yet somehow, through hard work, some fine-stitching, and a heavy-dose of electric-charge, the Gilbert’s cast and crew have brought this musical comedy to life.