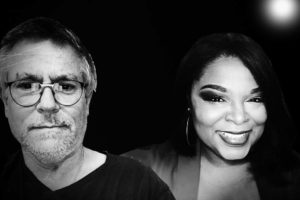 This week we talk with actress La’Tonya Wiley about her upcoming show at the Temple Theatre in Sanford, “Ghost: The Musical,” (which opens Oct. 18 and runs to Nov. 4) wherein she stars as psychic con artist Oda Mae Brown. We also test her on her knowledge of ghosts in entertainment (and we manage to fit in a very obscure reference to the 1995 film “Theodore Rex“).

We also speak with Burning Coal Theatre Artistic Director, Jerry Davis about his theatre’s production of historic drama “Stuff Happens” by David Hare. The play, which follows the Bush administration, in the months leading up to the Iraqi war, is currently playing at the Burning Coal Theatre until Oct. 28.